The history of Bernalillo County predates New Mexico statehood in 1912.

The first Courthouse was established at a building owned by Santiago Baca. From 1883 to 1886, the Armijo House in Old Town served as Bernalillo County’s first offices, including the Courthouse. This is the east side of what is now the Old Town Plaza. 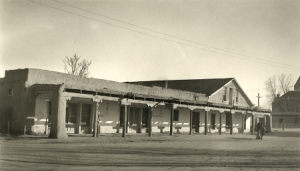 The next Courthouse was constructed in 1886 near Lomas Boulevard and Central Avenue just south of Old Town. It served Bernalillo County for the next 40 years. The Courthouse was financed by the Bernadelli and Palladio Law Firm at a cost of $62,000. 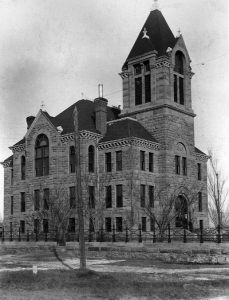 In 1923, support increased for a new Courthouse. Pearce Rodey, founder of the Rodey Law Firm, directed a petition drive to move the Courthouse to “New Town” and persuaded county commissioners to approve a $500,000 bond. The brick building went up near Tijeras Avenue between Fourth and Fifth Streets and opened in May 1926. Surrounded by trees and a small park, this Courthouse served the county until 1964. 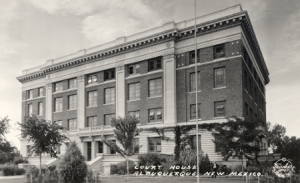 Today, this building borders the west side of Albuquerque’s Civic Plaza.

In December 1964, a new Courthouse was dedicated by U.S. Supreme Court Justice Byron R. White. The complex included a renovation of the 1926 Courthouse and a brand new building along Tijeras Avenue, which featured a fourth-floor jail.

Sheets of marble were positioned over the bricks on the old Courthouse to modernize the building’s street appeal.

1980 also marked the opening of Metro Court, which consolidated the Magistrate, Municipal and Small-Claims Courts in Albuquerque.

The current Courthouse at Fourth and Lomas was completed in June 2001 at a cost of $45 million. Funding was provided by capital bonds. 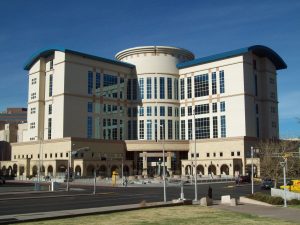 Currently there are 27 judges in the Second Judical District Court:

The tour brochure below gives quick courthouse facts and describes the artwork displayed throughout the building.